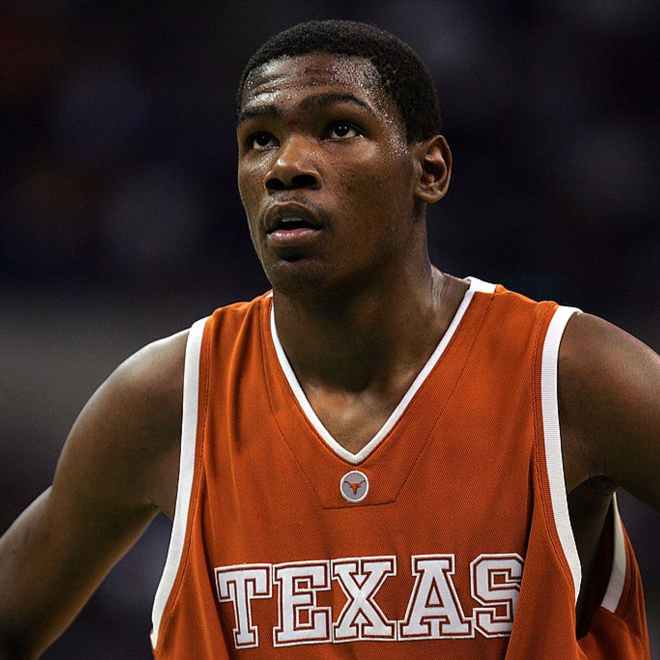 Looking back, many NBA fans have said that they would now have taken Texas forward Kevin Durant over the Ohio State big man Greg Oden. Obviously that’s easy to say now since Durant has already had an amazing career, but back before the actual draft, very few people said they would. One (and one of the very few) NBA analysts/commentator who said he would have taken Kevin Durant over Greg Oden BEFORE the 2007 draft was Bill Simmons. Simmons questioned if Oden was a hard worker like Durant was, and what long time consequences his injuries had.

When the post draft report cards came out, most gave the Boston Celtics a D- or an F for trading their draft pick (which was Jeff Green) for Ray Allen. At the time, no one knew that the Kevin Garnett trade was to follow, so on the surface acquiring Ray Allen didn’t make sense for the struggling Celtics. After all their off-season transactions were finalized, everyone gave the Celtics an A+ for their trades.

And speaking of the Celtics, this was the first time in exactly a decade that they played poorly enough to have a big chance at the number one pick. The Celtics had been hoping all season long that they would have secured Greg Oden with the number one pick. In the end, the lottery balls didn’t bounce their way and the Celtics fell to the fifth spot. The last time that happened, which was in the spring of 1997, the Celtics missed on drafting Wake Forrest center Tim Duncan.

And just one last tidbit on the Celtics 2007 draft: prior to the draft, rumors were circulating that the Celtics would be interested in trading the pick if they did not score the first or second pick. This was also before any news that a Kevin Garnett trade was happening as originally Kevin was not interested in joining the Celtics. At the time, talks of potential trades had the Celtics blockbuster trade to be trading for someone like Shawn Marion. Would be strange seeing Marion in a Celtics jersey, right?

The super early mock drafts (those as much as a year in advance) had Florida forward Joakim Noah being selected as the number one pick. Noah had a strong showing in the 2006 final four, and many analysts pre-season felt he was the best college prospect at the time. Noah ended up staying in school one more year instead of declaring for the NBA draft in 2006, to stay in school and win a second title with his Florida teammates. In the end, Noah was drafted 9th by the Chicago Bulls.

Most of the teams that were drafting in the lottery worked out Yi Jianlian and felt he had so much upside potential that down the road he could have been an NBA All-Star. There was only one team that did not work him out that was in the top ten of the draft, and that was the Milwaukee Bucks. Yi and his agent refused to go to Milwaukee for a private work out and did not want to play there because, “Milwaukee did not have a big enough Asian population”. The Bucks still drafted him anyway, and that was the beginning of a tumultuous relationship with the Chinese swingman. Yi was with the Bucks for only a single season before being traded.

Thiago Splitter was actually projected to go much higher in the 2007 draft, and possibly even be a late lottery pick. Splitter had played some solid years in Spain, and was looked at as someone who could fit into the NBA game right away. Many team executives, feared that even though Splitter said he would do whatever it takes to play in the NBA, that his club team would not allow him to be released from his contract. Many executives didn’t want to use a first round pick on someone who may never play in the NBA, and thus he dropped considerably.

By far the biggest steal of the 2007 draft has to be center Marc Gasol. Gasol had a strong showing internationally prior to the draft and was labeled as a possible mid to late first rounder. In fact, many predicted he would become a Spur given their history of drafting international players late in the first round. Gasol ended up dropping around 20 spots to the late second round, with many teams passing up on him. The Seattle Supersonics in fact, passed on him twice in the second round.

Five players from the Florida Gators national championship team were selected that night in 2007. But one senior player and starter was noticeably absent from being drafted was guard Lee Humphrey. Humphrey was not drafted and did not make any NBA team as an unsigned rookie, even after a great senior season as one of the best 3-point shooters. In today’s NBA, someone with Humphrey’s 3-point ability would definitely be picked up somewhere in the second round, but in 2007, that was not the case. Humphrey did spend multiple seasons overseas playing in Greece, Hungary and Ukraine, and had a solid career.

And probably the most interesting aspect of the 2007 draft: prior to the draft, many NBA fans speculated that if the Seattle Supersonics were able to secure the number one pick and draft Greg Oden, that just maybe there could be a chance in keeping the Sonics in Seattle. Oden had one of the greatest high school careers of all time, played amazing in the NCAA championship game despite playing injured, and was expected to be one of the NBA biggest young superstars. He was being compared to Patrick Ewing and Shaquille O’Neal. Remember the renewed interest in the New York Knicks after Patrick Ewing was drafted? People felt that maybe the same thing could happen to Seattle. Nike was already planning a huge contract for Oden and Oden was expected to be a superstar with multiple rings. Kinda sounds like Kevin Durant’s career. In hindsight, whether or not the Sonics drafted Oden or Michael Jordan or Lebron James, they were already sneakily moving to Oklahoma City.