10 Things You Didn’t Know About The 1996 Chicago Bulls 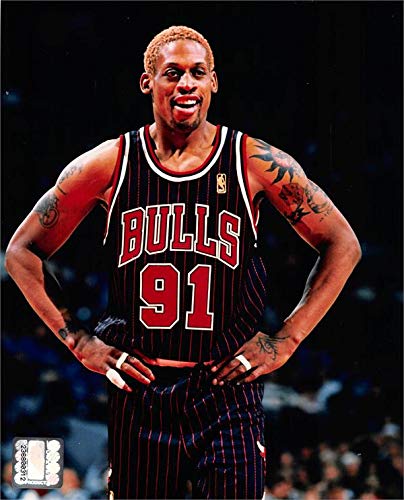 In order to get Dennis Rodman from the San Antonio Spurs, Phil Jackson and the Chicago Bulls front office had to get the approval from Michael Jordan and Scottie Pippen to acquire Rodman.  Jordan was in-all for the rebound and defensive master and the rest is history. 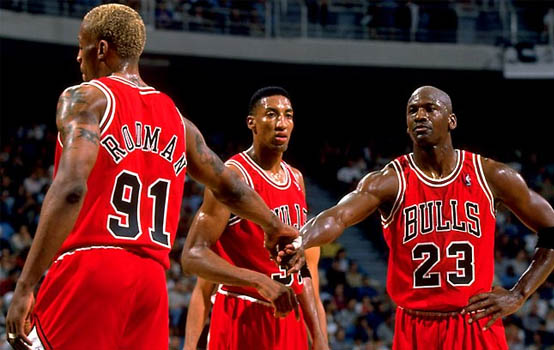 Half of the 1996 Chicago Bulls earned less than a million dollars a year.  The average salary for that Bulls squad was $1.6 million with Jordan and Toni Kukoc being the top two earners.

Even though the 1996 Chicago Bulls were early season favorites to win the NBA championship and had the most famous player ever in Michael Jordan, they did not lead the league in attendance that year.  The ’96 Bulls were number 2 in attendance, following the Charlotte Hornets.

In 1996, the Chicago Bulls as a team averaged just 6 three points attempts a game.  To put that in perspective, some perimeter players today average more than 10 per game.  The leader in three point attempts that year?  Scottie Pippen.

After the NBA finals was over, Supersonics coach George Karl was asked who he believed should be the Finals MVP.  The obvious answer to that question of course is Jordan, but Karl named Rodman as the person who should be chosen.  Karl added that Rodman’s rebounding, particularly his offensive rebounding helped the Bulls gain an edge with second chance opportunities.

Of the 10 losses the Bulls sustained during the regular season and the 3 in the post season, the worst lose came at the hand of the New York Knicks on March 10th.  The Knicks beat the Bulls 104-72, and it was the only time the Bulls lost by more than 25 points that season. 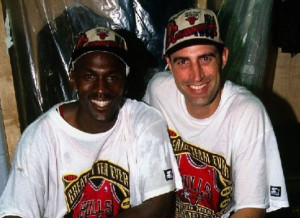 Also acquired in the Dennis Rodman/Will Perdue swap was Rodman’s close friend Jack Haley.  The 6-10 center played just 7 minutes of one game for the entire regular season and post season.  His salary for those 7 minutes: $225,000. 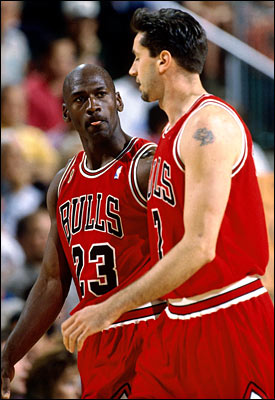 Michael was not the only Chicago Bull wearing Air Jordans during the regular season.  Teammates Toni Kukoc, Randy Brown, and Ron Harper all played in games wearing the iconic Air Jordan XIs. 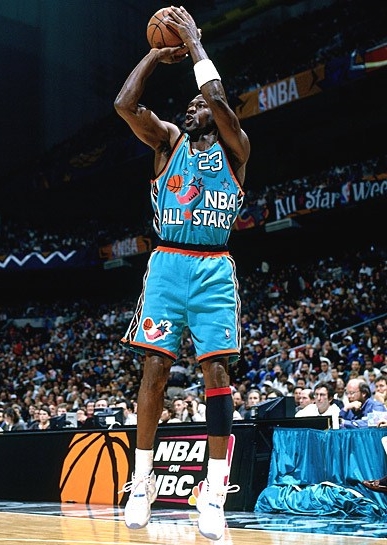 Even though Michael Jordan was and still is the most famous basketball player, he was not the leading vote getting in the classic 1996 All-Star Game held in San Antonio.  It was actually second year guard Grant Hill who got more votes than Michael Jordan.

The end of the 1996 season was the start of the disputes between Bulls players, coaches and the front office and management.  The Chicago Bulls owners wanted to prove to the players that they were not a special group and that they were the reason for winning championships.  The Bulls front office didn’t want to overpay most of its players and didn’t offer many players long term contracts.  After the Bulls won the 1996 finals against Shawn Kemp and the Supersonics, Michael Jordan said in the post game interview that he really wasn’t sure if everyone would be back for the following year, but he hoped they all would.