This one was easy.  Lebron is the all-time what if of the NBA Dunk contest.  Some say he would just be okay, as he is an in-game dunker and not really a contest/show dunker.  Others say, well, he won the dunk contest in high school and is probably physically capable of completing any complicated dunk.  We will for sure never know, even though he said he would be in a bunch of them, he never actually was. 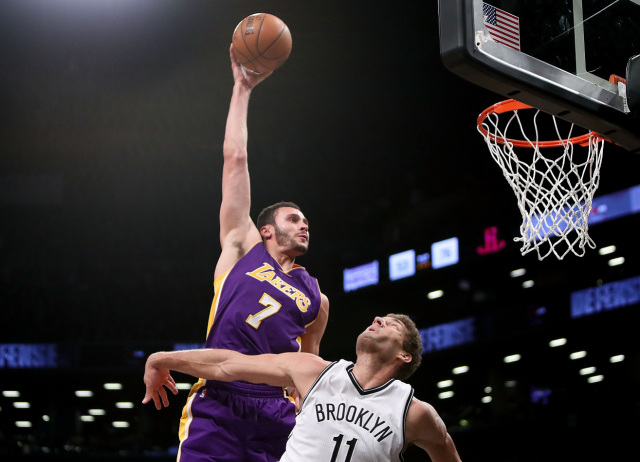 For right now we are putting Larry Nance Jr on our list, but that may change this All Star game next month.  Nance Jr was invited to compete in last year’s dunk contest (which he most likely would have won considering how awful it was) but declined because of a bruised knee.  As of right now, the NBA has not contacted him yet for this year’s dunk contest, which is conveniently being held in LA, but has said that will strongly consider it if asked.  If he competes and wins, he would be part of the first father-son NBA slam dunk contest champions.

Pre-injury Grant Hill was supposed to have competed in the 1997 NBA All Star weekend dunk contest, which incase you forgot, was the one Kobe had won.  Grant Hill was initially on the dunkers list, but then dropped out.  The NBA canceled the dunk contest the next year and then the injuries started to pile up on the former Duke forward and then that was that as far as the dunk contest goes.  A Kobe Bryant vs. Grant Hill dunk off would have been pretty interesting. 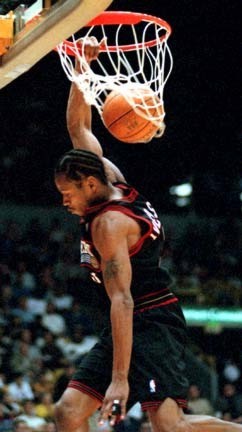 Another person who should have been in the ’97 dunk contest.  We just said that a Grant Hill vs. Kobe Bryant final would have been sweet, but now just imagine an Allen Iverson vs. Kobe Bryant dunk off.  AI was on the original list of dunkers, but then dropped out citing shoulder issues.  Even though he complained about a shoulder issue, he did go and compete in the Rookie game (which he won MVP) later that same day.  Maybe last minute AI saw the list of dunkers in the contest and got scared?  Who knows.

Now Dwayne Wade has never competed in a dunk contest.  Not in high school or college or the NBA.  We put him on our list of dunkers we would have liked to see in the dunk contest because of the game-time dunks that he did when he was younger.  As an undersized 2-guard, there probably haven’t been many better in-game dunkers than D-wade ever.  Back when he and Lebron were Heat players, their pre-game warm-ups gave us a tiny glimpse how D-wade would have been in the dunk contest.

Wilt Chamberlain claims he was the greatest dunker that he ever saw, and Wilt saw and competed against a lot of the greatest dunkers ever.  For those of you who don’t know who Herb White is, Herb was a white basketball player who played for the Hawks in the early 70s.  The 6-2 guard didn’t get a lot of burn, but when it came time for game time warm-ups, Herb had the whole arena applauding his dunks.  Would have been a great addition to the first ABA dunk contest held in 1976.

So, this guy you may have never heard of.  This 6-6 forward was a former Slovenian professional who was drafted by the 76ers in 1997.  He was then shipped to Phoenix where he played in limited amounts for two seasons.  What makes him so qualified for this list?  Well, he won a few European dunk contests in the 1990s by jumping over cars.  And we mean clearing the convertible, not the Blake Griffin way.

Remember that guy who beat out Kobe Bryant in the McDonalds All-American dunk contest?  That was former Chicago Bulls guard Corey Benjamin.  Now, not many videos of Benjamin exist, but trust us when we say that he could jump out of the gym.  Corey played for the Bulls from 1998 to 2001, but never once entered the dunk contest.

Air France was just an all around amazing dunker.  He could dunk with his left as easily as with his right or with both hands.  Could also leap off one foot or two feet just as effective.  Has a whole high-light reel of sick game dunks during his many NBA years.  Never once competed at the All-Star weekend dunk contest.  We would have liked to see it. 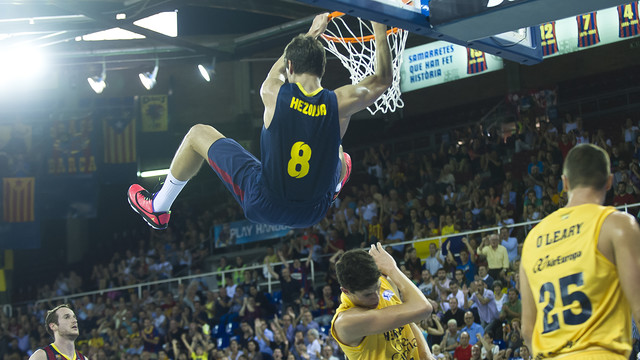 Was supposed to be the winner of the 2016 NBA dunk contest, which would have made an already crazy dunk contest even more interesting.  Could Mario Hezonja have either beaten out Aaron Gordon or Zach Lavine?  Who knows, we can only speculate at this point.  Sources say that he went and completed each dunk Aaron Gordon completed in the dunk contest in practice the next day.  He had guaranteed a win in the dunk contest, but then withdrew his name.  He has said that if the NBA does invite him to compete that he will in the future.

Any other players that you would have liked to see compete in the NBA Slam Dunk contest?