This was a difficult list to make, but we knew we just had to make it.  We made a unique list of the 5 greatest ball handlers of all time.  What makes this list unique from all the other greatest ball handlers of all time you ask?  Well, most (actually all of them) have just players who have played in the NBA.  The list usually is titled, “best ball handlers to ever play in the NBA”.  But since we are experts on the subject and have followed the greatest dribblers since we were practically born, we know that there have been amazing ball handlers from guys who never did play in the NBA.  What about the Globetrotters?  What about the players who were amazing in college but never did make an NBA squad?  What about amazing ball-handlers from overseas and in Asia?  What about all the NYC streetball legends?  What about streetball legends from all over the US?  How could we exclude some of these players?  So we went through everybody, and we mean EVERYBODY from the last 100 years to see who exactly were the greatest of the greatest when it comes to handles.

So here is the list, just 5 players and one bonus that are the greatest ball handlers to ever touch a basketball.  And in no particular order, here they are:

There might be a few of you who are reading this having no clue who Marques Haynes is.  Well, just so you know, he may be the greatest dribbler of all time to ever touch a basketball.  If you really want to get to the origins of every basketball dribbling move, you have to look right at Bob Cousy.  But Bob Cousy and Marques Haynes were born in the same year, so it actually could be Marques as the inventor of most of these dribbling moves.  Marques Haynes dribbling skills were so spectacular that he literally used to stop the old Harlem Globetrotter games.  Now, these weren’t games against the Washington National bums, these were games against American college players and overseas professionals.  And none of them could stop him.  In fact, some of his dribbling exploits were so ridiculous that they are used as memes on Instagram today.

No ball handling list can ever be complete without the Pistol.  Every great ball handler from the last 25 years (ie Kyrie, Steph Curry, Chris Paul, Jamal Crawford) all practiced dribbling drills invented by Pistol and his father Press.  Those same drills are performed by NBA players and college players in gyms across the world to this day.  Is Pistol the greatest of all time?  Many would say yes, as Pistol was the inventor of many modern day moves and passes.  Pistol “Pete” was the original “showtime” and fans used to buy tickets just to see what he could do with a basketball.  Steph Curry today is basically a more polished and efficient version of Pistol Pete.  Go watch some of Pistol’s games at LSU when he was in college, and you will see a lot of Steph’s modern day game in those ancient black and white videos. 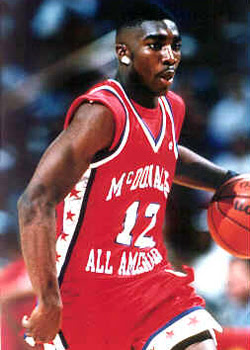 Shamgod is the only player from this elite list of ball handlers to have a move named after him.  As great as the Pistol was, he never got his own move, and neither did Allen Iverson or Isiah Thomas.  The Shamgod is such a classic because there really is no other move like it.  But Shamgod’s ball handling skills go beyond his own signature move.  Unfortuntely for him, Shamgod is never listed on any great all-time NBA dribbler lists because he only played less than 30 games, all in the 1997-98 season.  The next decade plus of his life was spending wowing overseas crowds with his dribbling skills.  But Shamgod deserves a spot right at the top of any greatest ball handler/dribbling list.  If you have never seen Shamgod play before, watch the 1995 McDonald’s All-American game to see an 18 year old Shamgod at his finest.  Long-time commentator Bill Raffery, who had seen almost every star high school and college star player from the 1960s and on, said Shamgod might have had the best handles since the Cooz 40 years earlier.  Something interesting to note about Shamgod: he taught the legendary Black Mamba how to perfect his crossover.

A favorite of ours since his early days as a Hoya wearing Air Jordans with black socks.  AI cracks the top 5 of all time best ball handlers to ever touch a basketball.  AI changed the way that basketball is played and ushered in iso-basketball from the late 90s and early 2000s.  AI’s moves were so slick that the league had to make rule changes against his dribbling skills.  Hell, even MJ couldn’t stop his crossover.  Something interesting to note about AI: his famous crossover/carryover move he actually learned from a much less talented walk-on at Georgetown University, learned and perfected it.

This was a tough pick, like REALLY REALLY tough.  It was hard enough to narrow the list down to five players from every level of basketball players in history, and it was even harder picking just one from street ball.  If there is one thing that street ball has not lacked in the last 60 years, its talented ball handlers.  There is The Future, Skip To My Lou, The Professor, The Best Kept Secret, Bone Collector, Booger the list just goes on and on and on…..So picking the most important one out of the group was difficult here and we are sure that some people wont agree with it.  But here it is: from every street baller to ever play, Hot Sauce is the best ball handler from them all.  Now, we understand that Hot Sauce (and a lot of blacktop legends) got famous by manipulating the typical dribbling rules in the NBA.  We get that.  We also know that a majority of Hot Sauces’ moves would not work in a real organized game under normal rules.  We get that.  We also know that most talented NBA/NCAA defenders would never let him get away with most of his moves.  Yes, we get all of that.  But, we also get that Hot Sauce changed street ballin forever.  Hot Sauce actually influenced players who decided to pick being a street ball player ahead of a normal one.  Hot Sauce invented moves (albeit some that involved double dribbling/traveling) that no one had seen before.  So no disrespect to anyone else, but Hot Sauce is our pick.

We decided to add a 6th man as an honorable mention, just one single player as an honorable mention.  This was also another hard choice and since we picked Kyrie, that means a lot of talented players didn’t make the cut.  Jamal Crawford, White Chocolate, Chris Paul, Steph Curry all got cut.  We just feel that Kyrie today is superior to all those great ball handlers.  People are already saying that Kyrie is the best ball handler to ever play in the NBA, and he is just 25.  Kyrie is bringing a new style of play to the NBA today.  A style that young kids from all over the world are mirroring.  You better believe there will be Kyrie copycats in the future, most likely not as good.  Kyrie is that guy who can make an amazing 3 or 4 move dribbling combination and still finish off the play with a lay-up.  Kyrie ALWAYS finishes of the play clean with 2 more points to his stat sheet.  There have been plenty of players in the past (in the NBA and on the street) who could make an amazing move, and get to the bucket and miss the shot.  Kyrie is not that guy and that’s why he finishes off our list.

Who are your top 5 ball-handlers of all time to ever touch a basketball?