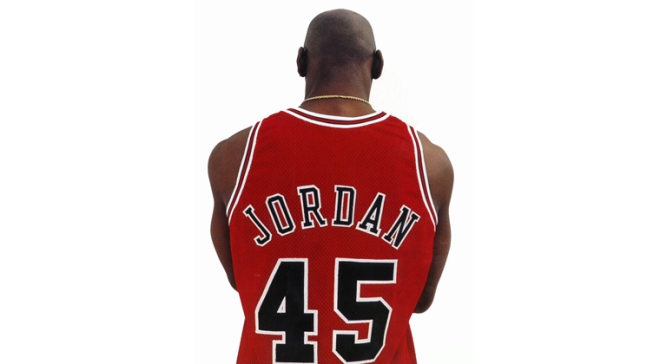 The Los Angeles Lakers this evening retired Kobe Bryant’s numbers alongside the other all-time Laker greats.  Kobe’s #8 for the earlier part of his career, then switched over to #24, which he finished his career wearing.  Kobe switched the number to 24 as that was one of the numbers he played in as a teenager.  The other number he wore, #33 was the number he finished graduating high school, but was obviously not available to him when he joined the Lakers squad.

Which got us thinking, should the Chicago Bulls retire MJ’s #45 that he wore briefly during the 1995 season?  He played 17 regular season games and averaged 27 points and also played in 10 play off games that season (although he didn’t wear 45 the entire 10 games) and averaged 31 a game.  MJ had switched to #45 in 1995, as his father was no longer around and his father had only seen him wear #23.  So that was part of the switch.  Another part is that after coming out of retirement, MJ was looking for a fresh start and decided to go with a new number, one he had always wanted but was his older brother’s number.  Is it time for the Bulls to honor their greatest player ever and also the greatest player of all time by retiring his short lived but classic #45 to the Bulls rafters?

What do you think?